Some time ago at Nokia I voluntarily developed a search engine tailored for internal resources (Windows shares, intranet sites, ldap directories, etc..) - NSearch. Since then few people helped me to improve it so it became unofficial "search that simply works". However, as you can image, this was purely a side-by project so I didn't pay attention to quality of the code much (I'd love to do so, but cruel time didn't permit :/). As a result during passing months a lot of technical debt was borrowed.

Recently we came to a conclusion that it's enough. We agreed that the backend of the service is going to be first in line. Because all of it was about to be rewritten we thought that maybe it's a perfect time to evaluate other technologies. Currently it's using Python2.7 + Django + Gunicorn. We consider going to either Node.js with Express 4, Python3 with aiohttp or C++. Maybe other language would be even a better match? However, we don't program in any other languages on a daily basis...

In this post I'd like to show you results of my very simple evaluation of performance of these three technologies along with some findings.

Attention: I'm not an expert in performance testing. Thus it's possible that I made some mistake. Source code of all inspected programs is available here. I recommend you to have a brief look at it. In case you find anything wrong or suspicious that might have influenced my results please let me know. Thanks.

I prepared two JSON objects used for two following benchmarks. The first was simple {"hello": "world!"} and the second was extracted directly from NSearch and connsisted of about 10k of characters, but I can't include it here. For the C++ I used Restbed framework and jsoncpp library, just to have anything with normal URL path support (otherwise results wouldn't be reliable at all). 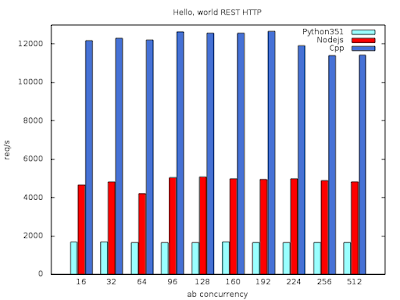 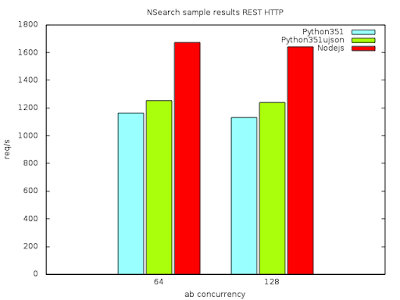 Quite interesting, isn't it? I was hoping Python 3.5.1 with language async support and it's asyncio module will be faster. I was also anticipating that C++ will be about 30% faster and not 2.x time faster. Again I must admit that the intuition is deceptive.

Second benchmark - conclusions:
(I excluded C++ because of convenience of filling JSON object)


Why Python is so slow and Node.js much faster?
Python is interpreted language. This is main reason why it's so slow. Why it's not the case with Node.js? Because Node.js uses V8 - JavaScript interpreter - which has built-in JS JITter. JITter means Just-In-Time compiler which can speed up execution of a program by order of magnitude.